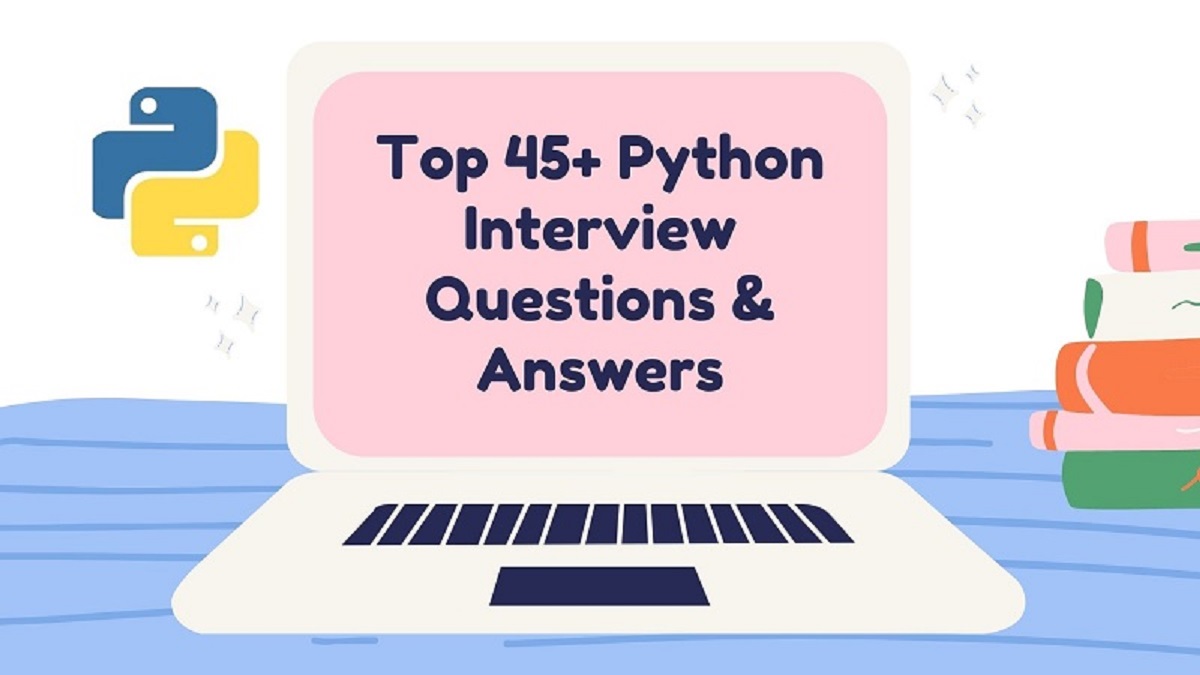 Python is a popular programming language that is used to create web applications on a server. Python is used alongside software and can connect to database systems. It is also used to perform complex mathematics and to handle big data. Python can also be used for rapid prototyping. It works on different types of platforms including Windows, Mac, Linux, Raspberry, and Pi. Python has a syntax that allows the developers to write programs with fewer lines. The language runs on an interpreter system and prototyping is quick.

Python is used in various areas like Web testing, Data extraction, Artificial intelligence and Machine learning, Web development, Cybersecurity, etc. The average salary of a Python developer is also very high which is why a lot of people prefer learning this programming language. Python has vast libraries and excellent user support that is considered as its biggest advantage and benefit.

Python Syntax uses new lines to complete a command, as opposed to other programming languages. It relies on indentation, using whitespace, to define the scope of loops, functions, and classes. Python Certification is a sought-after skill in the programming domain. The major python interview questions and answers need to be understood to successfully crack the interviews. Python basic interview questions and python coding questions are an important part of any type of interview. 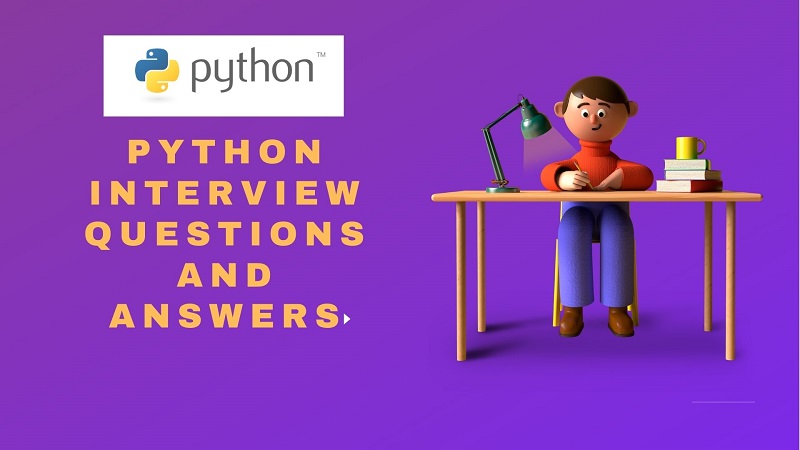 Q1. What is python programming?

Ans: Python is an open-source and object-oriented programming language that is used for different types of applications. It can run on various platforms like Windows, Linux, UNIX, etc. It offers excellent community support and also has an extensive library.

Q2. What are the key features of the python programming language?

– Python is an interpreted language and unlike languages like C, Python does not need to be compiled before being run.

– It is well suited to object-orientated programming

– In Python, functions can be assigned to variables

– Writing Python code is quick but running it is often slower.

Q3. What is python programming used for?

Q4. Why Python is an interpreted language?

Q5. What is a python interpreter?

Ans: An interpreter reads and executes the code. Python interpreter is a stack machine that manipulates different stacks to perform various operations. It is a bytecode interpreter and the input is the instruction sets known as bytecode.

Ans: PEP stands for Python Enhancement Proposal and it is a set of rules to format Python code. It improves the readability and consistency of python code.

Q8. What is namespace in Python?

Ans: A namespace is just a naming system. It makes sure that all the names are unique and also prevents naming conflicts.

Ans: The list is a data structure in python that allows you to store different types of data in it. Every value inside the list is called an item. Lists are represented as the values in between the square bracket.

Q10. What is the difference between lists and tuples in Python?

Ans:  Below is the difference between lists and tuples:

– Lists are mutable and can be edited while tuples are immutable

– Lists are slower than tuples. The syntax of lists and tuples are as detailed below:

Q11. What is PYTHONPATH?

Ans: It is an environment variable used when a module is imported. PYTHONPATH is looked up to check for the presence of the imported modules in various directories.

Q12. How is memory managed in Python?

Ans: Memory is managed in Python through private heap space. All Python objects and data structures are located in a private heap. The python interpreter takes care of this instead. The allocation of heap space for Python objects is done by Python’s memory manager. The core API gives access to some tools for the programmer to code.

Q14. Is Python a programming or scripting language?

Ans: Python is capable of scripting but it is considered a general-purpose language.

Q15. What is type conversion in Python?

Q16. What are the functions in Python?

Ans: A function is a block of code that is executed only when it is called.

Q17. How to install Python on Windows and set path variables?

Ans: To install Python on Windows, Install python from this link: https://www.python.org/downloads/

After this, install it on your PC.  Look for the location where PYTHON has been installed on your PC using the following command on your command prompt: cmd python.

Then go to advanced system settings and add a new variable and name it as PYTHON_NAME and paste the copied path.

Look for the path variable, select its value and select ‘edit’.

Q18. Is indentation required in python?

Ans: Indentation is necessary for Python as it specifies a block of code. All code within loops, classes, functions, etc. is specified within an indented block.

Q19. What is the difference between Python Arrays and lists?

Q20. How to comment on multiple lines in python?

Ans: All the lines that are to be commented are prefixed by a #. All you need is to hold the ctrl key and left-click in every place wherever you want to include a # character. This will comment on all the lines where the cursor is introduced

Q21. What is pickling and unpickling?

Q22. In Python, what are the generators?

Ans: Generators are functions that return an iterable set of items.

Q23. How will you capitalize the first letter of string?

Ans: The capitalize () method capitalizes the first letter of a string.

Q24. What are strings in python?

Ans: In Python, strings are arrays that represent the sequence of characters. You can use square brackets to access the elements of a string. Once a string is defined then you cannot change them.

Q25. What are docstrings in Python?

Ans: Docstrings are documentation strings. These docstrings are within triple quotes and these are not assigned to any variable.

Q26. What are Python packages?

Q27. How can files be deleted in Python?

Ans: To delete a file in Python, you need to use the os. remove() function.

Q28. Does Python have OOps concepts?

Ans: Python is an object-oriented programming language. This means that any program can be solved in python by creating an object model. However, Python can be treated as procedural as well as structural language.

Ans: The split() method is used to separate a given string in Python.

Q30. What are python modules? Name some commonly used built-in modules in Python?

Ans: Python modules are files that contain Python code. This code can be function classes or variables.

Some of the commonly used modules are:

Ans: It is a collection of data that is used to store data values. It is a built-in function and is also known as associative arrays in other programming languages.

Ans: Pass statement is a null operation and nothing happens when it is executed. It is used for making the code syntactically correct.

Q33. What are the limitations of python?

– It is slow compared to other programming languages like C/C++ or Java.

– Python is weak for mobile development and hence it is not preferred.

Q34. What are positive and negative indices?

Q35. What is the use of relational, assignment, and membership operators in python?

1) Relational operators – They are used to compare values

3) Membership operators – It validates the membership of a value.

Ans: Index refers to a position in a list or string. The string is a list of characters and you access them with the help of an index.

Q37. What is the lambda function in python?

Ans: You can create an anonymous function with the help of the lambda function. It can accept any number of arguments but it can only have one statement.

Q38. What are the libraries of python that are used for Artificial intelligence and Machine learning?

Ans: Various libraries used for the development of AI and ML are,

Ans: Self represents the object of a class. You can differentiate between attributes and methods of the class with the help of self.

Q40. What is the difference between .py and .pyc files?

Q41. What are the different types of operators in python?

Ans: Every operator is used for performing a different set of operations. The list of various operators are as follows:

Q42. What are decorators in python?

Ans: A Python decorator is a specific modification that we make in code syntax to alter Python functions easily.

Q43. What is Lambda’s expression?

Ans: Lambda expression is an anonymous function that is often used as an inline function in Python code.

Q44. Why don’t lambda forms in python have statements?

Ans: Lamda form is used to make new function objects and then return them during the runtime, for that reason Lambda forms do not have statements.

Q45. What are iterators in python?

Ans: In Python, iterators are used to iterate over iterable objects such as lists, tuples, dicts, and sets.

Ans: Every object in python remains relevant in a specific area that is defined to it, which is called scope. There are different type of scope that are created during code execution in python and that is,

All the above questions are usually a part of Python interview programs and can be learned extensively by freshers and developers. LogicRays Academy provides you 100% guarantee for job placement by training students on live projects. Contact Us to start your career in Python.